The expression “Use a picture. It’s worth a thousand words.” first appeared in 1911. It was in a newspaper article quoting Arthur Brisbane, who was one of the best known American newspaper editors of the 20th century. It’s a saying that I’ve always liked but what I like more are pictures or art, that contain only words. Today someone showed me this. 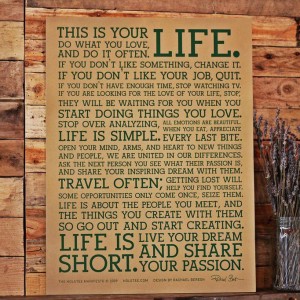 Needless to say, I love it and and agree with the words entirely.

It’s easy to take things for granted and that is something that I have been guilty of recently, something that I’m ashamed of. Just those words have made me think about how lucky we all are, life is truly magic.

It also made me stop and think about my bucket list. There are 100 things on there that I want to do in my lifetime and I intend to make sure that every single one of them happens. They’re in no particular order and I’ve never shared these before with anyone at all but here goes.

2. Make a toast at a stranger’s wedding.

9. Look out from the crown of the Statue of Liberty.

10. Run across the Brooklyn Bridge at sunrise.

11. Run across the Brooklyn Bridge at sunset.

12. Parachute jump from a plane.

13. Sit on the H of the Hollywood sign drinking Jack Daniels.

18. Go to the top of the Empire State Building.

19. Go to the Top of the Rock observatory deck.

23. Visit the Library of Congress.

26. Take a boat ride on the Bosphorus Strait.

27. Run across the Golden Gate Bridge.

28. Climb to the top of the Eiffel Tower.

30. Have a meal at Ithaa Undersea Restaurant.

31. Take a train journey throughout Europe.

32. Get lost in Venice with a girlfriend.

33. Live in a different country.

35. Stand on the glassdeck of the Willis Tower in Chicago.

38. Spend the night in a beach villa in the Maldives.

43. Get drunk at Oktoberfest.

46. Watch the World Cup in the host country.

52. Wake up on Christmas morning in New York. Preferably in the style of Home Alone 2 at The Plaza Hotel!

54. Ride the Cyclone at Coney Island.

56. Take a cooking class from a professional chef.

58. Go to the airport and take the next flight to somewhere random.

60. Ride the Ferris Wheel in Toys ‘R’ Us in Times Square.

61. Pay for a stranger’s groceries.

62. Take a train journey from the west coast of the US to the east coast.

65. Buy someone a first edition of their favourite book.

66. Take one second of video every day for a year.

67. Have a drink in the hidden bar in Grand Central Station.

68. Stand on the pitch at Celtic Park.

69. Join the mile high club. Absolute coincidence that this is the number it is!

76. Go on holiday to Las Vegas with the guys.

80. Spend Christmas Day on a beach in a hot country drinking cocktails.

86. Look for the Loch Ness Monster.

92. Take the Edge Walk at the CN Tower in Toronto.

93. Send a woman a drink across the bar.

94. Eat the hottest chilli pepper in the world.

96. Eat at the best restaurant in the world.

100. Practice 365 days of gratitude, do something nice for someone every day.

There are many things that are much more important to me than this list which require my focus and attention but I think this is a fun thing to do. Needless to say, everyone that I’ve spoken to who has such a list, has differing things on there and that is how it should be. It’s an individual thing but I’m thankful that many different people have shared the first 36 things to be ticked off.

I’m incredibly excited to see who will share the experiences still to come.